Ok, so I decided to setup a new VPC image with Windows 2008, SQL 2005, WSS 3.0 and Visual Studio 2008. Basically everything is going quite well, but there are a couple of things I encountered while installing, that I thought I would share.

From previous experience I knew that Reporting Services requires IIS if you want to install it. The first thing you notice that the server manager has changed a little. I went ahead and installed ASP.net and the Application Server which also installed IIS, but when I started my SQL Server Setup Reporting Services was disabled, so there was something wrong with the IIS install. It took a few minutes, but it seems you actually have to install the IIS role separately. (I had chosen ASP.net, and activated further options manually.) Anyway once the following picture appeared I was set to restart my setup. This time no problem.

I don’t like it, so I always go and uninstall it after finishing my base setup. (Usually when I start downloading stuff I need to install.) So I go to my Control Panel, go to Programs & Features and click on Manage Windows Features. Woha, the server manager appears. Ok, this is different to Windows 2003. I think it was David Platt who said something along te lines of “If you want people to use it, make it obvious. If you don’t want people to switch it off, hide it”. Well done, it’s hidden.

It took a bit of googling (sorry, but live’ling just doesn’t sound well as a verb) to find the right option to change. The feature is called IE ESC which can be found in the overview page of server manager. Now I know, now you know. 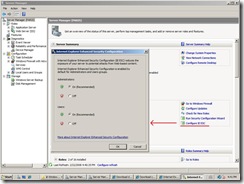 Ok, I live’d for “Windows Sharepoint Services 3.0” (I really did use live this time.) and downloaded the package. Started Sharepoint.exe and voila “This program is blocked.”. WTF? I read on and it asks you to install the setup package with the latest service pack and won’t accept anything else. Ok, my mistake, don’t blindly take the first link presented (I bet google would have pointed me to the service pack 1 download package – but I didn’t check).

This site uses Akismet to reduce spam. Learn how your comment data is processed.

As I look into the distance I wonder what would happen if every intersection was turned into a roundabout. 🤣⁠⠀